Did you know that your skin is the largest organ in your body? If you think about it, your skin endures so much – from harsh elements like wind and uv rays down to the effects of products we subject it to in the name of beauty and skin care.

In recent years, I have started to care more and more about the health of my skin, particularly the skin on my face. Maybe it has something to do with the wrinkles I’m getting as I’m growing older or even the bags and dark circles I see developing under my eyes from exhaustion. Either way, I’m beginning to see the true need for skin care.

That being said, I love trying new products. Influenster recently sent me a complimentary bottle of Garnier Bio Facial Oil. I had never heard of it before, so I wanted to try it out and let you in on my thoughts.

First, let’s talk a bit about facial oils. Oil has been something that most people want to steer away from when it comes to their face. There are products on store shelves everywhere that state ‘oil-free.’ I admit, I’m usually one of those who shys away from putting oil on my face. After all, I don’t want my face to be oily. I’ve tried the oil cleansing method (washing your face with oil), which has pros and cons (leave me a comment below if you want me to do a post on it). However, using oil as a moisturizer of sorts has never made its way into my skin care routine.

Let’s jump into the review.

I’ll start off by saying that I tried this oil on two different occasions, 1 week apart. My first impression was slightly different than my second try, but the end result was the same for both. 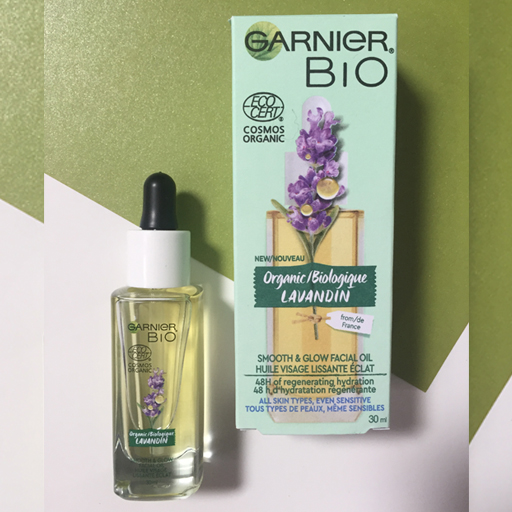 Garnier Bio Organic Lavandin Smooth and Glow Facial Oil sells for $19.99 (CDN) on Amazon. It claims to be non-greasy and provides regenerating hydration for your skin. It claims to be 100% natural-origin fragrance. It also states that it is for all skin types, even specifiying use for sensitive skin. Garnier states that the oil is certified organic and vegan. They also utilize 100% recyclable cardboard in the packaging.

There was no clear information on what this oil was meant to be used for. I assumed it should be used as a moisturizer, but I had a difficult time finding out why I should add oil to my routine. After posting on social media, I realized that a lot of people use similar oils in their skin care routines, so maybe I’m just behind the times on this.

The scent had an essential oil smell, but not distinctly lavender. Before I tried it for the second time, I did a bit of research on Lavandin. I found that it is a cross between a few varieties of lavender, but it has a sweeter scent. I did find this to be true. It’s also not only lavandin, but has other oils in it. I found the scent to be very relaxing, soothing and calming.

The oil was not greasy, didn’t leave a film or greasy feeling on my skin the first time I used it. The second try, my face didn’t feel greasy on my face, but I did have to wash a slight film off my hands after applying a drop to my face.

In regards to the claim that it is for sensitive skin, the first time I used it, my face felt agitated, rashy and itchy. This is the reason why I waited a week and then tried it again. When I tried it the second time, I put a timer on just in case it happened again. Sure enough, within 7 minutes of applying 1 drop to my face, my skin became itchy and agitated. I did find this strange since I don’t have extremely sensitive skin. However, I react that way to Jojoba Oil and after googling the ingredient list, I found that Simmondsia Chinensis Seed Oil is in fact Jojoba Seed Oil.

Aside from my reaction to the Jojoba Oil, I did like this product. Although, the reaction is kind of a big deal. It means I won’t be able to utilize this particular oil in my skin care regime. If you have any suggestions for me on another oil that doesn’t have Jojoba Oil in it, let me know in the comments.