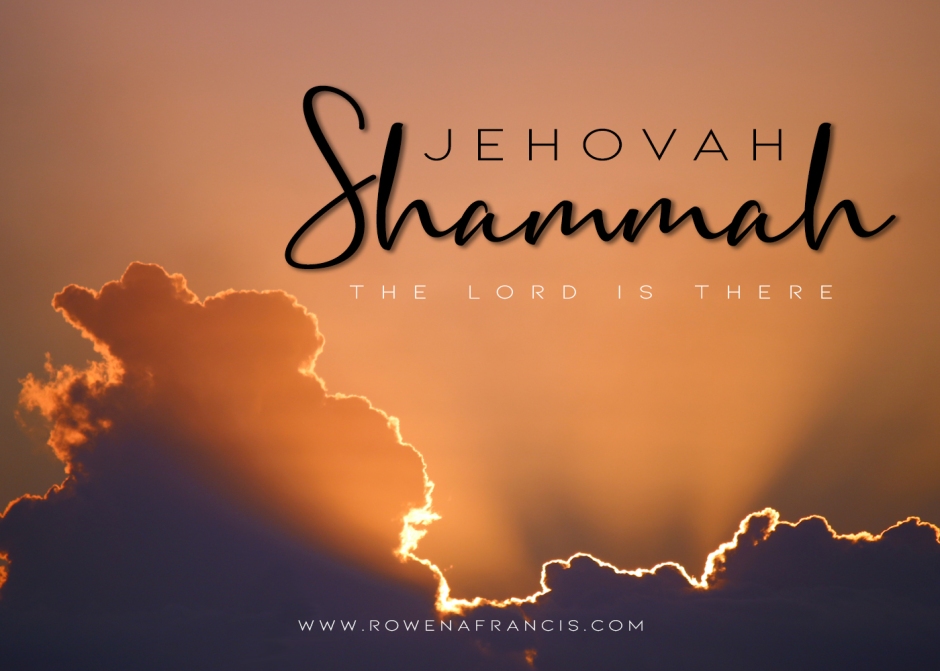 We are living in an increasingly strange world. In the midst of voluntary and involuntary isolation, we find ourselves often feeling alone. We not only ask where everyone is when we look outside, but also even ask “Where is the Lord?”in all this? I’ve been doing some blogs on the praying through the names of God because each of God’s names reveal to us more of His character. As we know more of His character than we can have more revelation of His nature. This revelation helps us as we pray to the all powerful God. Today we are going to discuss His name of Jehovah Shammah.

With all this Covid-19 taken place all around us, it’s stirred up lots of conversation about end times and the book of Revelations. The Bible does speak about many adventures coming as we get closer to Christ’s return, but the main point of all these things leads us to the return of Jesus. That brings us to the name of God, Jehovah Shammah, which means The Lord is There.

It is originally referenced in Ezekiel 48:35 “The distance around the entire city will be 6 miles. And from that day the name of the city will be ‘The Lord Is There (Shammah).” In this passage, it speaks of the New Jerusalem and that the Lord will be there. After all things are said and done, God will establish a new heaven here on earth with the New Jerusalem. This verse in Ezekiel reveals that God’s physical presence will dwell among us in the New Jerusalem. How amazing will that be? You see throughout time, we have seen God be there with us and even live amongst us with the life of Jesus, but now it will be established forever.

In these verses, Joseph was in difficult times as a slave and prisoner. Life was not easy for him but these verses show that God was there in the midst of his adverse situations and it makes a difference. How would Joseph survived the slavery and pit without God being there with him? We don’t always realize he is there but God is there making a difference.

Another way of describing this is with Shadrach, Meshach and Abednego. They were thrown into a fiery furnace for not worshipping anyone but Jehovah. What happens, though, is that three men were thrown into the fire but a 4th showed up (the son of God) and was there in the midst of the fire with them walking about. How exciting is that to be in the worst trial of your life, literally thrown into burning blaze to have the son of God walk around with you in the midst of it.

So these were examples of Jehovah Shammah in the Old Testament but now in the new covenant, His presence is constantly with us when Christ accomplished the work of the cross. Galatians 2:20 “I am crucified with Christ; and it is no longer I who live, but it is Christ who lives in me.” And in Ephesians 3:17 is just one of many scriptures that reveals Christ resides in us “That Christ may make His home in your hearts through faith”. Jehovah Shammah feels very much like Immanuel (God is with us), this is because it would be difficult for God to be there and not be with us. So the two are really tied together. I believe there is still yet another revelation of Jehovah Shammah. I’ve shown you one perspective of what Shammah means, and it’s one thing to know that God is with you, but it’s another thing for your enemies to know that God is there by your side.

“5 And when the ark of the covenant of the Lord came into the camp, all Israel shouted so loudly that the earth shook. 6 Now when the Philistines heard the noise of the shout, they said, “What does the sound of this great shout in the camp of the Hebrews mean?” Then they understood that the ark of the Lord had come into the camp. 7 So the Philistines were afraid, for they said, “God has come into the camp!” And they said, “Woe to us! For such a thing has never happened before. 8 Woe to us! Who will deliver us from the hand of these mighty gods? These are the gods who struck the Egyptians with all the plagues in the wilderness.”